There are days where things fall apart. I work hard to make something work only to get multiple signs from all angles that maybe I should let it go. I’ve had this happen a number of times.

Busting my buns to get to a play date, despite a broken down car, bad directions, and fussing baby who’s missed a nap—then when I arrive the kid we’re set to play with is super sick with chicken pox or something equally annoying. Yes, that’s something I’d like to know before agreeing to a play date, thanks.

Doing everything I could to get a job promotion, despite failed hard drives putting together the paperwork, shady interactions with potential bosses, and staining my dress shirt right before the interview. Then when I get the job, find out it’s for less pay and more hours. Not exactly the promotion it was advertised to be.

In either case, the universe is trying to warn me against something and I’m so determined that these are just hoops to test my strength (sometimes they are), but a lot of the time it’s exactly what it is: a huge blinking caution sign.

I ran up against one of these caution signs this weekend. I absolutely can’t believe I’m going to blog about shoes, but here it goes.

When I had my son about seven years ago, I had some major nerve damage. Long story short, I had to do several months of physical therapy to re-learn how to walk (I had the ability to stand, but the signals to pick up my legs and set them back down was not activating). Maybe someday I’ll blog about it, but not today. (A year later I had to do another year of PT, for a re-occurrence of the same problem—again another blog post). During the course of the PT, my physical therapist explained that I should wear a certain type of shoe for my safety. I just don’t have the same muscle control as I did before in my legs. And I could never really walk in a heel to begin with . So I need shoes with tons of grip, wider bottom for stability, and preferably something that supports around the heel, so I don’t have to fight for balance (not a slip on, not a flip-flop, not a pump).

I got rid of my worst offenders (Good-bye Dansko). I figured I’d get by and cheat with the rest. I wore my dress shoes so infrequently, I figured I’d walk carefully and slowly and make it work.

I was born without the girl shoe obsession gene. I don’t really like to shop, especially for shoes.

Then this last year, my black dress shoes stopped cutting it. The leather has become so stretched out; it’s hard to wear. So I thought rather than buy new shoes, I’d use my Eddie Bauer gift card and buy a new dress and a new skirt. I only owned one dress before and no skirts. I swapped out my black shoes and thought I should start wearing my brown dress shoes instead. My daughter begged me to wear my new skirt around town and I did.

The black shoes are too stretched out and I’m sliding around in them. The foot bed of my sandals (which are fifteen years old) are crumbling and falling apart between my toes. And I thought I was being smart to save money by re-discovering my brown shoes, but they fell apart while I was walking around the house. No, really. They LITERALLY fell apart. I’m not mis-using the word literally. I’m not creating a hyperbole. Here is a photo of my brown Clarks shoes: 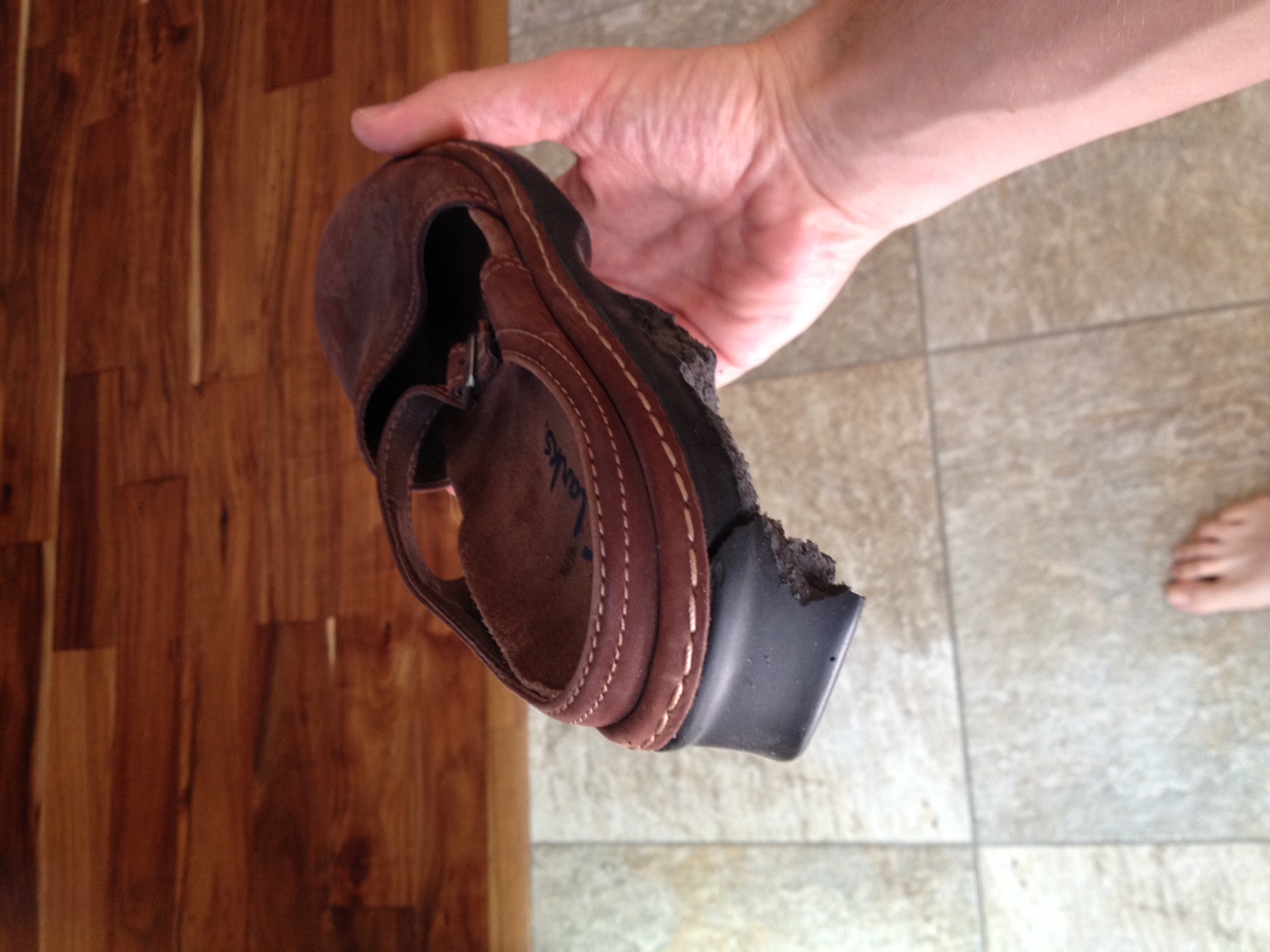 I was just walking and the rubber started crumbling. My husband is holding the shoes in these photos (in case you’re creeped out by my incredibly manly hands :) 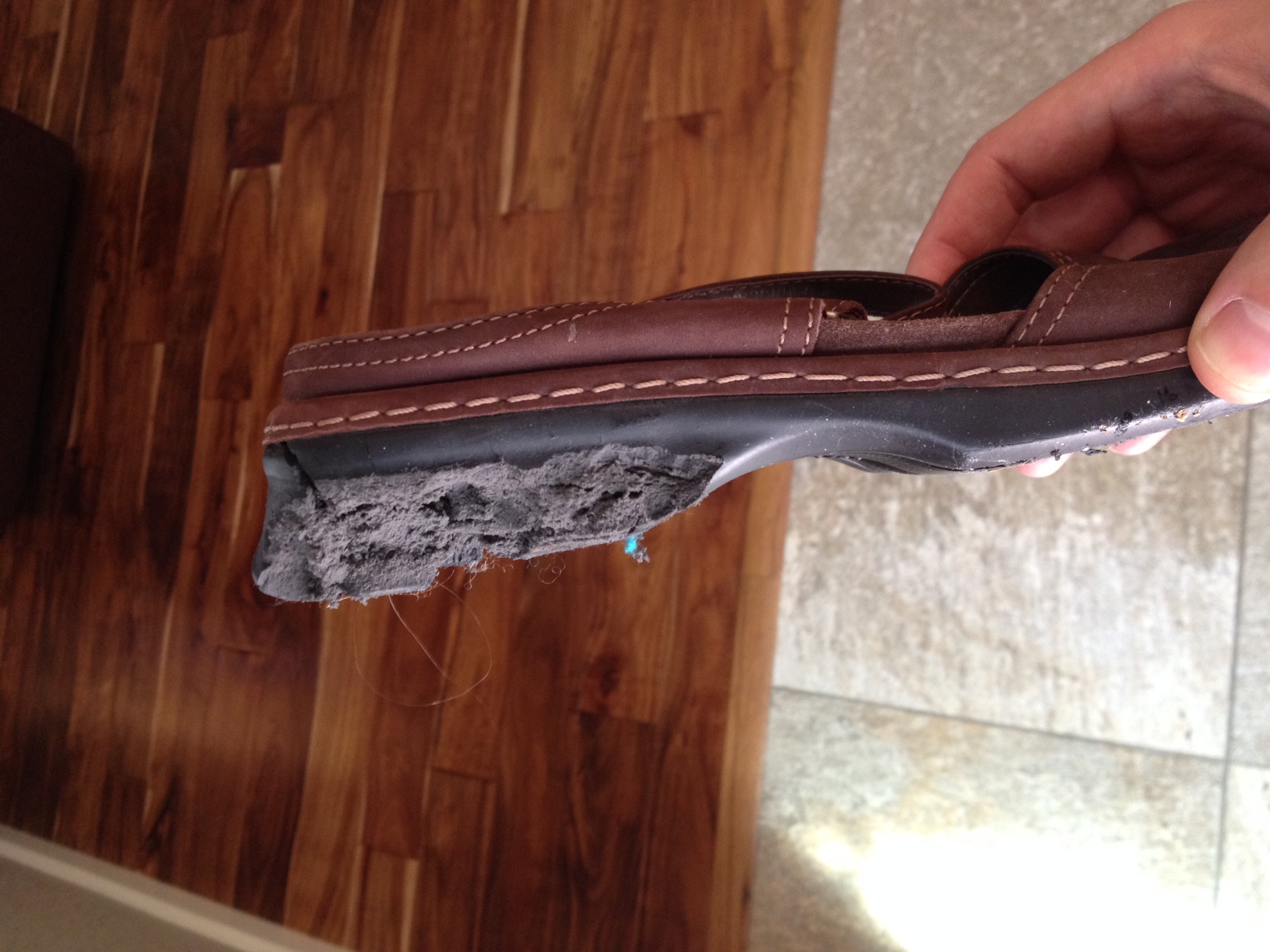 Here is an angle where you can see a string of hair. Excuse me while I go sweep the floor again…

So you can see, for once, I’m not exaggerating.

Things fall apart. Stories I’ve spent months perfecting don’t sell, despite the personal rejections piling up. Plotlines lose their logic and stop making sense, the kids get sick when I have a deadline, and I settle for last minute get-togethers with friends than the planned out parties we used to throw. It’s like I’m duck tapping a plastic chair together that is not safe to sit in anyway, or scrambling to keep a paper tablecloth from blowing away in the wind. Maybe I need a new chair. Maybe the table underneath is fine. Maybe that story that won’t sell is not my best and I have to dig deeper.

I’m pretty sure the universe is trying to tell me to let the world crumble a bit. And then search the remains, because something interesting/more beneficial/more healthy always comes out of the pieces. Instead of holding on to the old things around me (keeping status quo), it’s time to take action. It’s time to go the directions I’m being pointed toward.

And it’s time to buy a new pair of shoes.

We love comments! Every time you leave a comment something someone tried to make work that didn’t will turn out to be better than originally planned.