On Friday I ran out of shorts and it was going to be a hot day. I eyed my closet and although I’m not a dress girl, I thought it would amuse my daughter to wear one. I put on the dress and a magical thing happens when I dress up, I start to feel a little better, a little more positive.

I needed that, the positive feeling. The end of June had been a whirlwind of stressful events. It kicked off with my son having a Cyclic Vomiting Episode (he takes a preventative, but sometimes we have one break through). Then one of my fathers-in-law ended up in the hospital (in ICU) for longer than expected (two weeks) after a surgery. We invited my mother-in-law to stay with us, so she could be closer.

And of course the time period was not lacking for writing related disappointments; the highlight of which was an anthology I’d been invited into rejecting my story. It’s not a common practice to have this happen. Stories that editors ask a writer to write are generally used, if they’re not acceptable quality editors usually work with the writer or give them one last chance to get it right. I’d never respond to a rejection, but in this case I had to know. Being dyslexic I work really hard to make my stories engaging and free of errors. I don’t want my handicap to show or a story to be accepted because it was “as good as someone with a writing disability could manage” but because it was the best story period. The editor assured me it was not my story; in fact, it was among their favorites. It turned out three pro writers turned in stories too long. My story happened to be the right length to keep them on budget. I’m actually thankful for his honesty. He could have easily told me it was not what they were looking for, that it wasn’t hitting the theme, or was low quality—but he told me the truth. I’m grateful that he did. I’m just annoyed that I turned down other work to do this project, because it fit my skill set the best. Such is the life of writing as an award-winning writer who doesn’t have an established name. Yet.

So although I’m not a dress girl, I put on the dress, I wore the cloche 1920s style hat, and when my mother-in-law called and wanted to go out to lunch as a thank you for offering a place to stay, I felt as if my luck could be turning. All because of the dress. 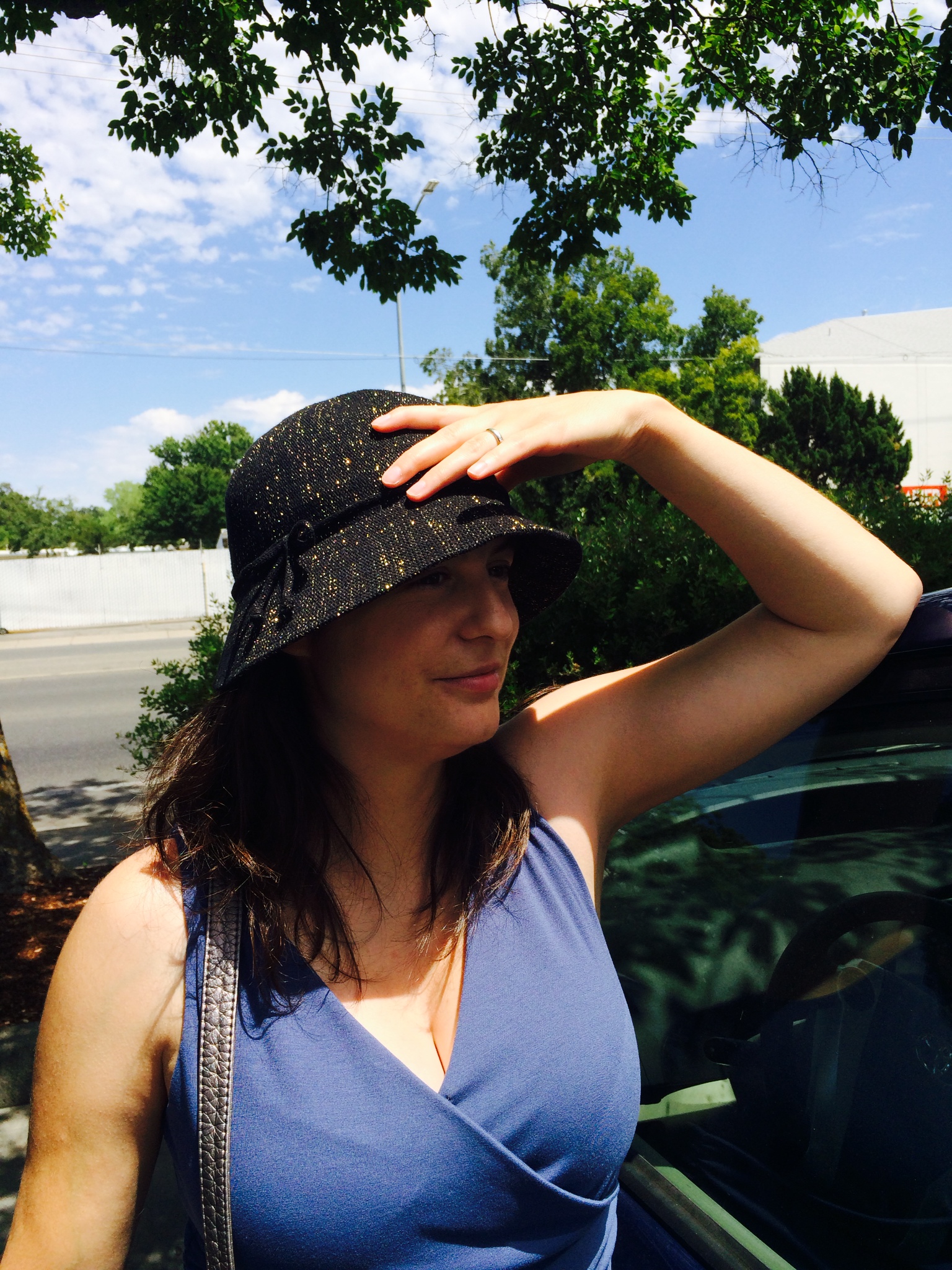 My mother-in-law was snapping pictures faster than the paparazzi to commemorate the occasion of me in a dress.

It was just a few hours later as I sat writing that my best friend, Meghan, called me. I went out to the back porch and an uncharactistically light breeze was blowing, the sun was shining, casting a yellow glow off the tree leaves and grass. It was a perfect, beautiful day, the kind that leads to open doors ripe with possibility. And I listened carefully as my friend explained to me that she has breast cancer.

I nodded in all the right places and of course the enemy cancer is slated for doom. I imagined the cancer cells squealing like pigs as the chemo treatments took effect. And, like the warrior princess we are, we hope to bathe in the blood of this cancer enemy. I just was hoping she was calling me to tell me she’d sold a story since she writes now, too.

I promised to call our other friends; she was done talking about it for the day. I made a note to call and check-up on her parents and make sure they were doing okay. I know how hard it can be to so far away and try to quell the overwhelming feeling to not hop on the plane just to hug her.

I called my parents and although they were camping and out of cell range I left a message. Our parents are friends and see each other often (her dad works with my mom) so I wanted them to know.

The next morning my dad called to reassure me it would all be fine. My dad had cancer earlier this year, so hearing his reassurance helped. He was on his way to work, but would go back to camp in a few hours. A few hours later my sister called. I answered with a hesitant voice, because I assumed that the Siskiyou County Grape-Vine was at work.

“Yep. How’s camp?” I asked because we still had to get out pleasantries, right?

“Tina.” She stopped, paused for a minute. This was not about Meghan. “Have you heard from mom or dad?”

“I talked to dad this morning. He was on his way to work….”

Sensing I was not up to speed, she cut me off. “The house burned down. Mom and dad’s house burned to the ground. I can’t get a hold of our brothers to tell them.”

She assured me that everyone was okay, and that our mom was on her way to the house to check out the damage. Apparently it was still burning, but had already been declared a ‘total loss.’

I left messages for my brothers trying to get a hold of them before they checked Facebook (Already people were posting about it, which goes to show how close our community back home is). I talked to my mom who was in good spirits about the whole thing.

“I needed to downsize anyway.”

“My first thought was of Rexida.”

Rexida. A nightmarish fabric doll with a plastic head, an anatomically correct plastic butt,  one lazy eye, and receding hair suspiciously the same color as mine. I carried her everywhere as a toddler. That horrible doll that my siblings and cousins tormented me with. Finally gone. We shared a therapeutic laugh over poor Rexida’s fiery demise. 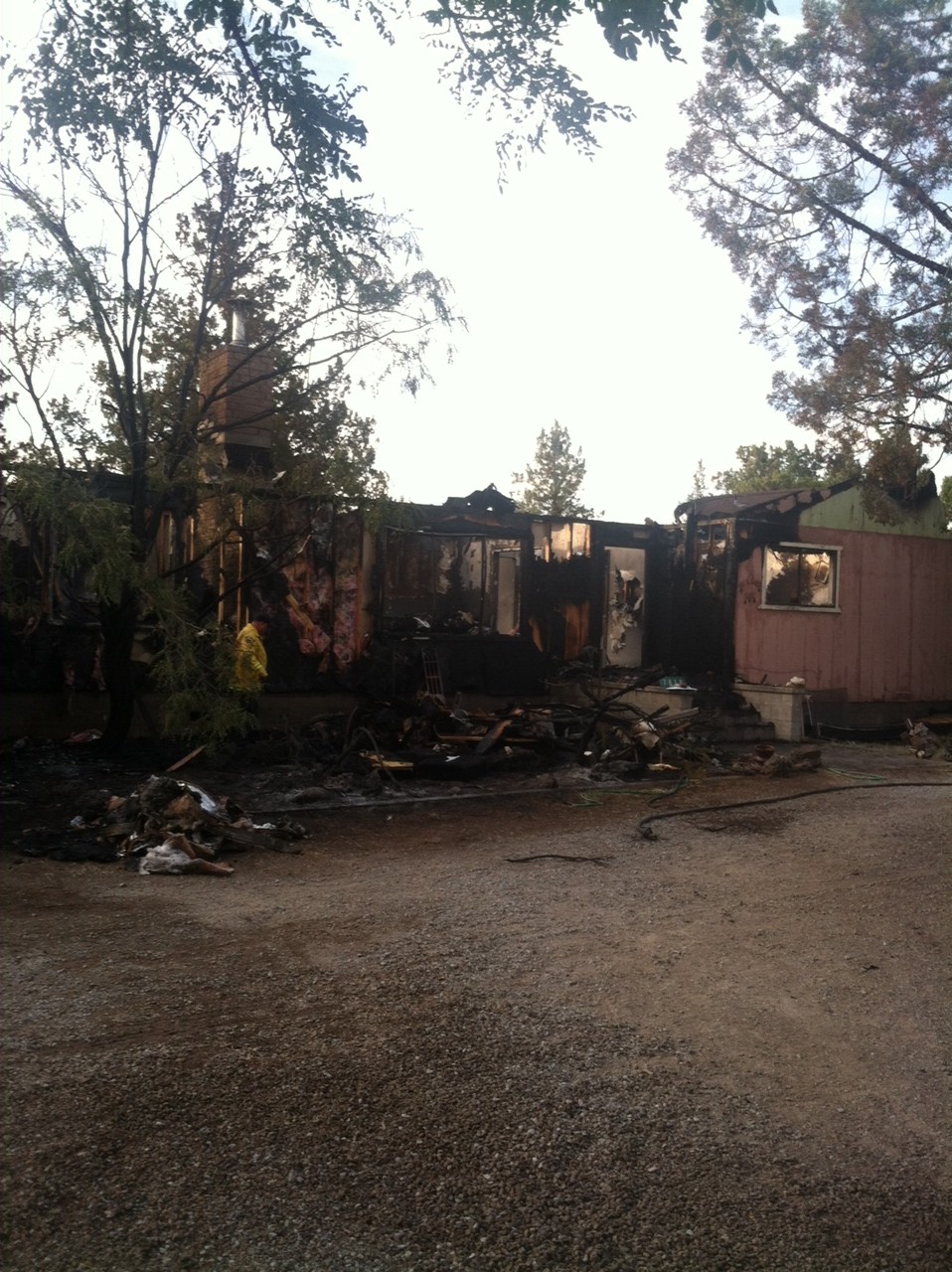 Then I texted my friends, which consisted mostly of rampant cursing. Meghan called me within two seconds of hitting send.

I gave the initial explanation: My dad had decided to go back to the house to check on it, and when he turned down the driveway it was already engulfed in flames. They don’t know what caused it yet, most likely a freak accident with wiring, or any spark of any kind since it’s so hot and dry there.

And then we burst out laughing.

I mean, what are the chances of all this bad news happening at once? We declared that good Karma had to start flowing soon, just to balance it all out. Neither of us are the types to sit around and wait for bad news, or even wallow in it, so we decided that focusing on the good things that were happening right now—even though the bad seemed to be eclipsing it—was the only way to proceed forward. So we’re doing 100 Days of Good Karma—where for the next hundred days we’re focusing on the sliver lining in each day.

If anyone would like to join for all or part of it, you’re welcome to participate.

Last night I went to bed with a new purpose to keep positive. But sometime in the night I started thinking of all the things that were gone. It started out as small things like my mom’s record collection from the 60s and 70s—there were a few Beatles albums in there I think, I remember them anyway. There were photos going back for generations, a lot of mementos of both my great-grandmothers. We’d just transferred a bedroom set that my great-grandma Freda had left to me to my parent’s house for the kids to sleep on when we stayed there. Her last name is the name I’d chosen as a pen name for writing. Then there was my husband’s glasses, Our Elf on the Shelf we’d stored there because it’s where we go for Christmas. Then it was the harder things, like the wall just as you enter the living room where we all measured ourselves as kids. Our friends and cousins measured themselves there, my kids for as long as they could stand had a measurement for at least twice a year. My parents lost a lot more: work records, important documents, furniture, computers, their home. My dad collects family historical and local geographical items like, Native American relics that had been passed down in his family, my grandfather’s war medals, and World War II uniform. Things I cringe to write, because I know they might read this post and be reminded. Even though they’re strong, resilient, adaptable, and being positive about the whole event.

My cousin is an EMT and was volunteering for the community fire department and was on the call. They were able to throw a few things out the window before it wasn’t safe to do so anymore. 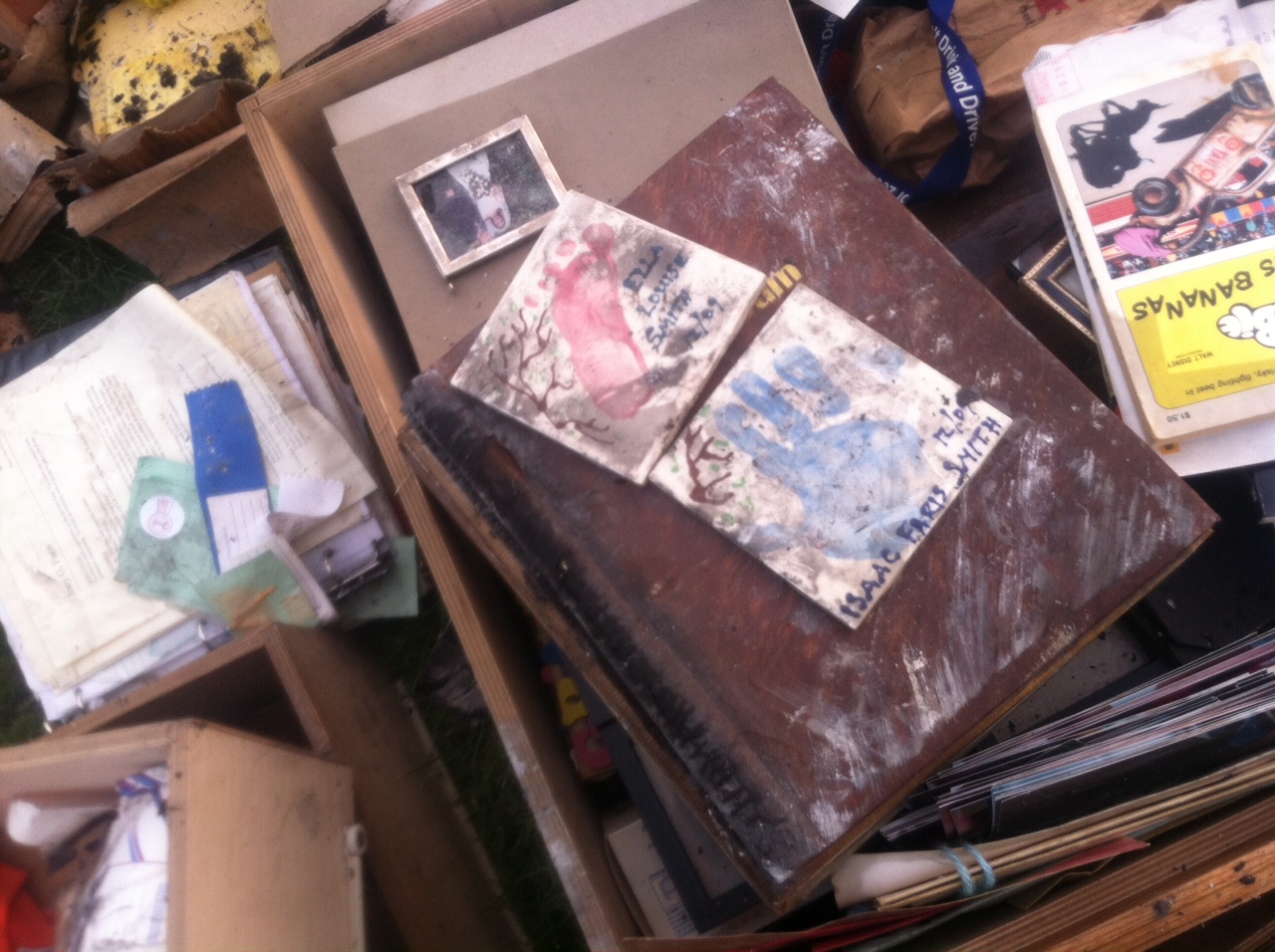 One of the items saved was a small photo of me on my wedding day and hand and foot impressions of my kids we’d given my parents as a Christmas gift.

I remember during a particularly bad fire in in the forests of Chico, the air was filled with ash. It swirled like snow on the sweltering smoky day. I would avoid looking too closely at the debris floating around me—in hopes that I could shield myself from the disaster of the loss of people I didn’t know. I saw one land on my car, smacked right in front of me, begging to not be ignored. It was the letter “a” fully visible. Someone’s home library burning at that very moment.

I faded in and out of strange mixed dreams all night, each time calming my racing heart by reassuring myself that my parents were okay, nobody, not even the family dog were inside the home while the fire raged. I’d not trade a single item for that. This is just stuff.

The mantra my mother kept repeating: it’s just things. Things are replaceable. Things are not needed.

And Pam put it into words best this morning for me: cancer is curable, houses can be rebuilt, and memories do not burn. 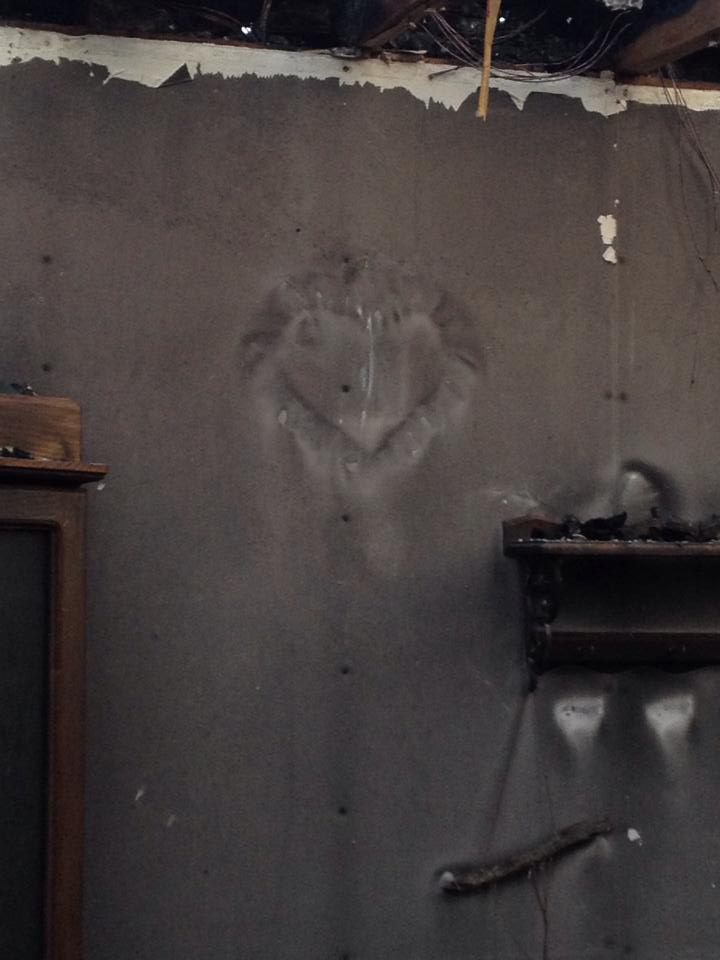 A childhood craft project. The project burned in the fire, but left the ghostly impression of a heart.

24 thoughts on “Memories Do Not Burn”