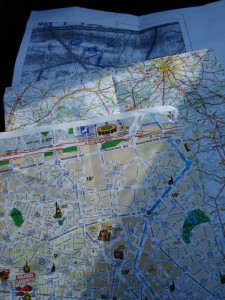 In 2005, I decided I wanted to see the ocean. After years of bad relationships and bad jobs and bad decisions, visiting the coast became a mecca for me, an escape, a quest for a holy grail that would reboot my life.  Changing my attitude by changing my latitude, as the old saying goes.

Problem was, I had no idea how to get there, and I am absolutely horrible with directions. I find reading maps challenging (I can refold them like nobody’s business though).  To put this in perspective, I’ve gotten lost driving to places I’ve been before, in straight lines, even in parking lots.  So, when I embarked on this trip on a spur of the moment, with no planning, in the days before GPS, I had a great deal of trepidation.

I ventured out on the dark turnpike, looking for signs that read south and east, occasionally

stopping for advice at gas stations and asking friendly looking pedestrians for directions. One elderly, sagelike, African-American gentleman, named Elvis, told me I was on the right track, “to just keep a’goin’ straight on through” (not as turn-by-turn as I would have hoped) but the saying became my trip mantra.  I ventured into a couple of sidetracked paths( Welcome to Maryland!)  until I reached my destination of Virginia Beach, Virginia.

I felt lost 98% of the time.  Caffeine, my Sheryl Crow CD, and my two headlights, were the only things keeping me awake and on the road as I drove all night.  A strange combination of excitement, determination, panic, fear and hope drove me to continue until I eventually found my ocean.  And it was worth all the stress when I walked barefoot on the empty beach with dolphins playing in the surf. I had grabbed my grail.  I had found my zen.

Lately, I have been plagued with a similar feeling of panic.  So many sources of information from friends, to internet gurus, to teachers, to social media proclaim different methods to reach the holy grail of publication, and not just publication, but publishing with an audience.

Traditionalist still hold firm that the old school Big 5 is the only way to get noticed, and if the writer hasn’t been picked up by them then the author obviously needs to work on their craft until they are good enough for an agent and a big deal with a publisher.

Indies advocates show me a golden road of freedom, more money, more immediate results. Many say that the big publishers are scrambling to just stay alive and are only contracting sure bets.  But independence comes with a price. They face a rocky road to finding an audience, of paying for editing, covers, and proofreaders, then have to spend a huge portion of writing time marketing. All these factors makes the golden road shine a bit less bright and makes me feel like I am driving in circles.

Small press publishers have a few onramps that they give free to writers, marketing, editing, proofs, and cover art.  Still discoverability is an issue, the lack of advance, and royalties are smaller than if the writer had self-published.

There are many potholes and dead end streets on the road to being published, but I’m here, panicked, afraid, but also hopeful and determined.  I still have my caffeine, my music (now it’s Alt J playing on YouTube), and the twin headlights of my research and hard work guiding me.  I have a feeling I will hit the coast any minute now, if I could ever get out of this parking lot.

3 thoughts on “The Roadmap”