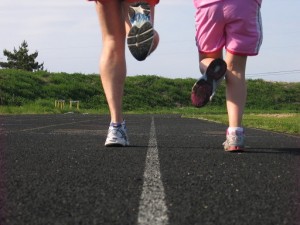 I love to run early in the morning.  I beat the heat, but added bonus, I don’t run into the brigade.  The brigade consists of all the dog walkers with too-long leashes and not enough concern, large families with strollers and kiddie bikes that clog the road, other faster runner who make me feel like I’m not a real runner.  Also the time alone, in nature, settles me, organizes my brain, and keeps me centered.

I am introverted but not antisocial. I will give a wave and good morning to those I pass. I will defer the right of way to those in large groups or anyone on a mission to burn up the road.  I’ll cross to the other side so people’s dogs don’t get too excited by my speeding by like some crazy, prey animal.

I try to be nice. I try to see it from other’s points of view.

Then someone figured out my game, or had the same idea, and he brought his daughter with him.  So a combo of two things that disturbed my peace, a group and runners that were faster than me.

I bucked up, gave way, shot them a wave and breathless good morning.

It was a though I didn’t exist.  I chalked it up to his focusing real hard.

A few days later, the gruesome twosome (I really can’t say that. They looked like a cover of Running World) zipped right toward me. I didn’t notice them right away and had to swerve to escape a collision.  “Sorry.” I said. “Mornin’!”

No response. Nothing but the metronome of their shoes, running away.  Over the next few weeks this continued. They never acknowledged my existence and would literally run me down if I didn’t move out of their path. It was unnerving Stepford Wife behavior.

I tensed up before my runs and changed my route to avoid them.  I even mumbled under my breath when I saw them. “Road hogs. Jerks.” (I’m a bit passive aggressive, so sue me.)

I finally had to come to some logically reason why they would act like total and complete tools.  I remembered a book I read in high school by Piers Anthony called Bearing an Hourglass.  In the book the main character has to reach the destination of a castle by walking and driving, (I could be wrong. It’s been awhile.)  But when the man was walking a car almost blew him from the road.  He cursed the driver.  Later, he found a car and made for the castle, speeding to make up time and almost hit a pedestrian, thinking wow, that guy should not be walking on the road.  It’s a fantasy novel about Father Time, so a bit of time travel was involved. The lesson was he was the jerk in each case.  He was both the driver and the walker.  He didn’t give himself empathy in either situation.

The memory made me realize that maybe this gruesome twosome are totally focused and don’t realize that they are being butt holes? Maybe like me they are introverts or even antisocial and they get up just to avoid others on the road, just like I do.  Maybe he’s trying to teach his daughter about stranger danger. I don’t know, but I’m going to give them a pass and let these anxious feeling go.

Running is an anxious free zone, and no matter their reasons, I’m not going to allow them to ruin it for me.  Like another pothole on the road, I will avoid them and try to use my empathy skills.

And perhaps get up just a little bit earlier.

What about you?  Do you have neighbors that tick you off by shooting fireworks at 1am? Co-workers that hum incessantly? Things that annoy you? Leave a comment and vent. It will make you feel better. I promise.