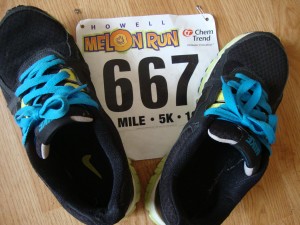 Let me tell you about my fitness/running background. I was a bookish, nerdish girl and hence was not very drawn to physical activity. In junior high, PE was a required subject, and I dreaded it with a singular passion. It was the only class I consistently failed at, even when I tried a somersault or to catch a football, the attempt ended with me in a crumpled heap on the sweat-drenched mat.

Then one beautiful spring morning the gym teacher decided to do a running unit. I hated it. My chest hurt. My legs hurt. Everything hurt. I had to walk most of my required mile run. The days and weeks passed more walking, more hurting. Finally, something strange happened. I started liking it.

The activity was easier than the others and seemed to use mostly mental focus. Oh, there were the boys who ran their 6 minutes miles that lapped me which still made me feel like an incompetent athlete, but something clicked. I walked less, the cadence gave me time to think and cleared my head, I had my first endorphin rush and I was hooked. I didn’t become a regular runner until my later teens and then dropped and picked it up over the years, but for the last seven years I’ve been a dedicated runner. Treadmills and trails, roads and sidewalks, I’ve run them all.

At first, a 5k seemed daunting so I trained and in 2009 I did my first 5K. Work and life intervened and I ran for fun. Then this year I committed. I would do a 10K and if I completed it then I would consider longer distances.

I knew people older than me did these races. I knew I had run almost that far before in training, but it’d been 6 years since my last race, and I was a slow runner. I had to prove something to if not the world at least myself.

I signed up for the my 10K and arrived on the night even with a storm on the horizon. I figured I could quit if it got too bad. I met a couple of runners while I was waiting in the holding pen before the race, both in their mid-thirties-ish and fresh off their first half marathon. They were just using this race a tune up. Their numbers were 1 and 2 respectively. 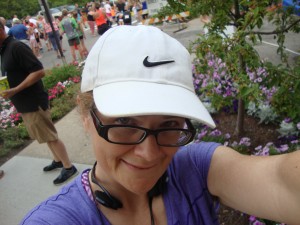 But I went back to my mantra. I may not be first, but I will finish. 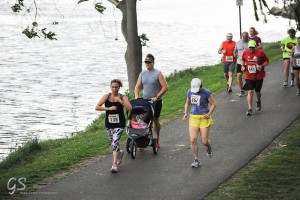 The forecast called for rain, but I prayed it would hold off until we were done. And it looked fairly clear when the crowd lumbered out of the corral like a giant dinosaur. The speedy people flew away and the crowd thinned. I forgot about the press of people around me, the ones who were older, younger, or had a child-in-tow, and I listened to my music and my heart.

By mile 3 the 5 K was almost done and the number of other striders petered out. At mile 4 I felt the first drop of rain. I prayed harder that the waterworks would hold off.

Some of my faster co-runners were already finishing with the 10K. I was close, only 2.2 miles left but my legs felt leaden. The wind started blowing, and the sky turned black. Of course, it had to happen today. They would call the race because of weather. But the others kept running and so did I.

The sky rumbled with thunder, and lightning flashed in the sky. My already overtaxed heart sped up. I wondered if I was going to die. Then I grew very calm as the wind and rain lashed at me. I would not let gusty water stop me. Nothing would stop me. In fact, I felt energized. The training worked, my legs were a metronome. My brain was stuck on seeing the finish line. I laughed a little and dug in.

Mile 5 the storm blew past and I poured all that nervous energy I’d had into a final dash. I finished with an average of 11 minutes per mile which is 2 minutes faster than my fastest time. I wasn’t anywhere near first, but I did beat number 1 and number 2. I don’t think they had run on trails before and I’d trained on them all summer.

I wondered why the rain had to come in mile 4. Why couldn’t I have a nice clean, easy race? Then I realized. I thrive when challenged. The more obstacles the race threw at me the harder I worked, the more determined I got to finish–to not allow the elements to beat me. And it was empowering, not just for my running, but for my writing and my life in general. It reminded me what I’m made of. I can and will face the challenges thrown at me and even if I don’t win, I will fight until the end. So my first 10k was an adventure and a success. By the next day, I was looking up ½ marathons for next year, already looking for my next challenge. Looking for the next obstacle to overcome, because obstacles are good for the soul. 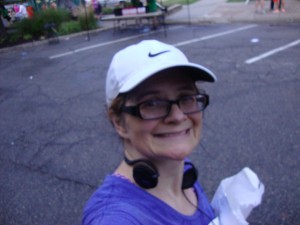 Is there anything you thought you couldn’t do then you succeeded? How did the experience empower you? Let me know in the comments. Or just stop by and say ‘hi’.

5 thoughts on “Good for the Soul”