Today is it. The last day of 100 Days Of Good Karma. There’s some Internet science quote. I don’t know if it’s right and I’m too lazy to look it up to be exact, but it’s something about it taking only thirty days to create a habit. If we do something over and over it will eventually sink in. I don’t know if that’s true. I don’t know if finding a silver lining to each day helped me think more positively. I don’t think this experience has made me more enlightened or elevated me to the next stage of self-awareness.

But I do know this:

There were a few things I noticed about trying think of a positive anecdote every day. One, some days it was hard and I was tempted to phone it in. Nobody would notice if I sneaked tacos in as my silver lining for another day….although tacos are amazing and so worthy. But I worked hard to come up with things that were real. It was hard because most days I have a routine and I work through the day and don’t stop to really analyze it much. Other days are just blah, normal, same. Nothing special. But coming up with a silver lining forced me to be present in the day, it gave me permission to stop and evaluate the blah with a different lens. 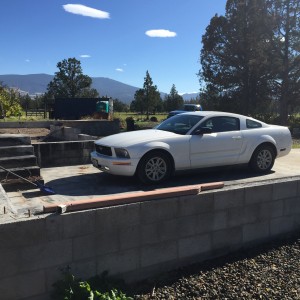 Good news! My parents can finally park in their garage!

Another thing I know is that I was very concerned with being real. I have training as a counselor and I became very self-conscious of the image I was projecting out. I’m not a pretender. I like to be honest with how I feel, so it was important to me to not have the Karma for the day be a sugar coated version of my life. Being positive does not mean being fake. Early on in the project I confessed to Meghan (Getting the Words Wrong) that I had some guilt over coming up with positive things when there were so many things going wrong for other people. Was I being a Pollyanna? Was I inadvertently taking away someone’s validation to express pain? By showing I wanted to remain positive each day, would that send the right message? In the end I decided to take points from the best example of someone doing it right. For example, Meghan’s ability to share the realness and horror of cancer mixed with humor and grace. Her blog is amazing and everyone should check it out.

The last thing I learned was that looking for the biggest thing was like chasing a rainbow. It’s beautiful to aspire to, but in reality the “best” thing or “something better” would always move. Things became “not big enough to mention” or “boring.” At some point, I stopped caring about the big deal things. In the beginning of the project I was doing small acts of kindness. I left coupons on items at stores, I bought a random person’s coffee, I gave money to a guy downtown in a wheel chair that had a sign saying he survived cancer and had fallen on hard times, I left tips at places I don’t usually think to leave a tip. But sharing those things became too hard. I didn’t do them to get a pat on the back, so I didn’t post it on Facebook. It took away the joy of the activity. I also think I was doing them because I had survivors guilt. *MY* house didn’t burn down. *I* didn’t have cancer. I thought I needed to make up for that slight, or accept eventual punishment coming my way. Funny how we talk ourselves out of grief.

In the end the simplest parts of the day became the most cherished and most interesting. I didn’t have to ride a Pegasus, or go on a cross county journey planting non-GMO corn across America Johnny Appleseed style—the most fulfilling part of my day became a simple conversation with my kids or spending time with family.

(although random acts of kindness sounds like an awesome project for another time). 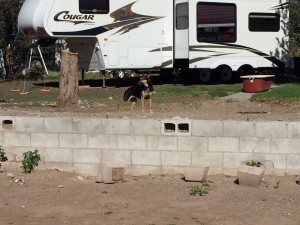 And so what did I do on my last day? Ironically I ended it where it all began. I stayed with my parents in their trailer. The place where the house once stood is roughly a 2,000 square-foot hole in the ground. From the view out of the trailer I could see the room where my husband, kids, and I would stay when we came for holidays or just a quick weekend to hang out with family. There are steps that lead to nothing and are stained with the smoky reminder of what happened 100 days ago. 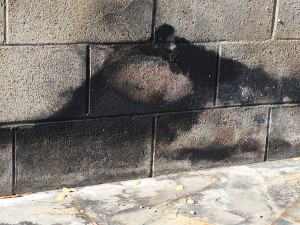 The house debris is gone, but the trees and bricks around the area are still holding the scars.

It doesn’t look like much now, but I’ve seen the plans for what’s going to be put in its place and if I close my eyes I can see the front porch that will extend much farther than the one that was there before. I see the outline of my parent’s new room where they’ll have more space. I see a kitchen that will be open to the living room and where my kids will eat never ending pancakes, which my dad sometimes calls dot cakes because he makes them super small to make the kids laugh. There are a lot of things that my parent’s can’t get back, but those things were not important. We will make a new measuring wall. We’ll make new family heirlooms; we’ll cherish the ones we still have and talk more about the people who left them to us. We don’t need things to help us remember the people we loved.

I also spent the day at my grandma’s house at Sunday dinner. My great-grandmother started the tradition. She’d have her whole family over every Sunday and my family still does this today. We annoy each other with jokes, we eat too many carbs, we horde the gravy boat….okay, maybe only I horde the gravy boat. And there is always a seat for one more person who happens to stop by on their way to town.

So maybe it’s hard to think of a silver lining each day, let alone a hundred days. In Megan’s post this morning she talks about her cure for a bad day. And it’s really simple: going for a walk (she says run. I don’t run), thinking of something positive for the next day, and a good night’s sleep. When I’m in a spiral of negative thinking I have a go-to plan that I pull out, too. Just like some people have a survival pack that they can grab on the go for an emergency, I have an emotional survival pack. Hint: it’s pretty much the same as Meghan’s (there must be something to that).

If you’re one of those people who can’t find that positive nugget for the day then maybe stop looking for the obvious rainbow, and start looking for it in the dirt that you grow your own vegetables in, or the smile on your child’s face. Look for a sliver lining in the simple things.

2 thoughts on “The Last Day”