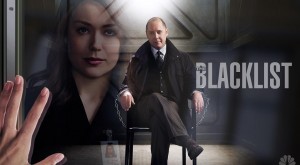 Just got caught in the vortex that is known as Netflix binge watching during a snow day hiatus. And I gotta say, I’m addicted to The Blacklist. Didn’t expect it either.  I’d heard from multiple sources that it was a great show and I should be watching.  I had reservations. The show had none of my favorite tropes no romantic theme, no science fiction or fantasy, (and let’s be honest) no beefcake male over which to drool.  But I did know I enjoyed James Spader and during a span in the 80’s and 90’s found him to be quite dishy, and he still had that amazing voice.

I sat down expecting to watch the first half of the pilot then move on to the next thing in my queue. I was enchanted.  The power that James Spader as Raymond ‘Red’ Reddington  brings to the screen with his every interaction with Lizzie is the stuff of classic must see TV.

But the more you watch, the more you realize he is definitely not a nice person. Definitely not one of the good guys, at least by traditional standards. He literally wears a black fedora. One of the FBI’s most wanted, he turns himself in as an informant and will only speak with Elizabeth ‘Lizzie’ Keen, a young profiler on her first day at the Bureau. But his presence on the screen is magnetizing.  The way he looks at Lizzie, the way he would do anything to protect her, is as engrossing as any romance. They have an undisclosed connection. And we get a bit of intrigue and spyventure and kick butt female empowerment, so the entire show is like a giant cream puff of goodness. But of all of super cool features, Red hooks me the most.

I enjoy his rhetoric, his storytelling, his loyalty, his irreverence, his self-serving agenda, and that in the end, nothing means more to him than Lizzie’s safety, even his own life.

Why does this character who in most shows or books would be a villain grab the audience by the emotional cajones and does not let go?

I have found characters like him almost always attract me emotionally. Antiheroes like Han Solo, Flynn Ryder, Damon Salvatore, BBC Sherlock, Spike, all have a few things in common.

They are all intelligent. In a room full of average hooligans, they can out talk, out maneuver, and outwit all comers. Red not only out thinks the FBI but he uses their influence to eliminate any criminal that gets in his the way.

Even in the worst of circumstance, they seem to find the humor in the situation. Spike, from Buffy the Vampire Slayer, changed from bad to good and fell in love with the lead character but still had a yen for watching his daily soap opera, Passions.

They are charming. Damon Salvatore, Vampire Diaries, can murder a dozen people and end the episode stealing a dance with Elena and swearing his undying loyalty and the views swoon.

Han Solo’s classic response when Princess Leia tells him she loves him.  Not the good boy, “I love you, too.” But instead, “I know.”  The character could write the guidebook on cocky bad boy responses.

Deep emotional core a/k/a their soft and gooey center. They care about their loved ones to a level that is above the law and moral standing. To save or be reunited with their loved one, they go to extreme measures. Spike fought through Hell for months to restore his soul, Damon returned from the dead, Red sacrificed himself to one of his many enemies in order to save Lizzie from a bullet in the head. Flynn Ryder dies instead of allowing Rapunzel to sacrifice her freedom.

After examining the blueprint for the antihero, I’ve come to a few conclusions.

Bad boys are fun, irreverent, romantic, and are highly entertaining, and attractive (in fiction). We return again and again to watch the morality play, to be entertained by their badness. and to root that they may find their inner good guy.

But for the audience to fall in love with them, they must feel redeemable. Even if they are never redeemed.

What do you think of the Blacklist? Bad boys?  Redeemable or unredeemable characters?  Leave me a comment.

One thought on “The Blacklist and Why I Love Antiheroes”