I have a really awful secret.

When I was a teenager I spent a lot of time with my great-grandmother. If I didn’t have theatre rehearsal, or track practice, I’d walk to her house and wait for a ride home (I lived pretty far from town where the high school is located). The ruse was that my grandparents needed help doing various chores around the house. I did the dishes, but mostly I sat and painted my great-grandmothers nails while she told me stories. Most of which were maybe true. Maybe.

Looking back now, I think I got some of that dramatic story telling flare from her. She was quiet and unassuming. Mostly she was a good listener—But if I asked her to talk about her childhood or tell me about some item in their house, she’d weave a good tale.

One of the things I liked about my visits there were that she was always very positive. She had a heart condition and she’d outlived the doctor’s predictions of her lifespan by twenty years or more. She’d always tell me how talented I was. She loved my drawings, she loved my cooking, and she loved how I massaged her hands before I’d paint them. She told me I could be anything I wanted and I believed her.

I wasn’t sure about going to college. I’d heard a lot of conflicting advice. One counselor had lamented it might be a waste of money, that I was the sort of student that would realize too late I didn’t have the capacity to understand the higher level thinking college would demand. I went to my grandma’s house right after that and cried. My grandma said, “Well, that settles it. You have to go,” along with a few other choice words for where the counselor could put his opinion—all very polite, of course. She was a lady after all. Her encouragement along with many others was much needed at that time in my life.

I came home for the summer after my first year and worked at a grocery store. Every day I’d go to my grandma’s for lunch. I’d talked about a program to go to London to study. My grandmother emigrated to the U.S. from England when she was three. She was ecstatic about the idea.

“It’s cold there,” she said. I have no idea how she could have any memories of that time, but she said she did. She remembered someone, a relative, dying on the boat. I wish I’d written that story down.

Then the planning started. Whenever I’d come home to visit she’d update me on family names she remembered. Places she wanted me to see and take pictures to bring back to her. Before I left she was so concerned about the cold she gave me a blanket. It was her mother’s. “This blanket is my great-great-grandmother’s,” I’d think to myself with awe. I stroked its rough wool texture and thought of all the people this blanket had kept warm.

“Just promise me if I give you this that you will use it. It doesn’t belong in a chest collecting dust. Things were meant to be used, not hidden away.”

The fall semester before I left for London was crazy. I called my grandmother usually every so many days to update her on how I was doing. Sometimes I wrote her. She insisted we write, although I hated it, but she said she liked getting letters and I secretly liked getting them too, so to get I had to give. I remember writing to tell her about not coming up for the weekend like I’d planned and about all the exams I had.

She called me to tell me that I’d made the right choice, that she wished me luck on my exams and papers and that she loved me. I wasn’t there to take the call, so I had a nice message on my machine when I got home from work. I guess I should have been suspicious then. Why didn’t she write? We did call each other every so often. I brushed it off.

She died a few days later–two months before I moved to England to study abroad, probably while I was writing a paper, a few days after the weekend I was supposed to be home.

I kept that message for years. When I got a new answering machine, I carefully preserved the machine, wrapped the cord around it and placed it in a closet at my parent’s house. Sometimes when I’d go home, I’d listen to the message.

That is my awful secret. The blanket stayed folded up in my hope chest, but the message got played over and over. People say you forget things about people after they die. I was horrified when I tried to picture her and couldn’t quite remember her features. I relished the fact that I’d cheated death of this one thing. I’d never have to forget the sound of her voice.

My pen name, Gower, is her maiden name. I didn’t bring the blanket to England like she’d hoped I would. I was too afraid it would get lost or ruined. I know she’d understand that, she wouldn’t have been angry—she never expected to die before I left—after all I was supposed to write her of all the places I saw. I was supposed to “go away and have adventures.” And I did.

Then when I came home I unwrapped the cord from the answering machine and would listen to her voice again. I kept doing it so many years later. The blanket that was supposed to be (and promised to be used) stayed safely tucked away.

I feel like I do this sometimes with my stories. I wrap them up and put them away after they’ve been published. I wrote something someone bought and enjoyed enough to pay for. But after they’re not in print anymore I wrap them up like the blanket and place them away in a hope chest. Someday, I’ll pull it out and use it again. Maybe tomorrow.

The answering machine is one of the things burned in my parent’s fire. I know I’ve talked a lot about the things they’ve lost, because they’re not the type to harp on it and try to remain positive. But all those scraps of memories that they’ve kept over the years to remind us of the people we loved–the fire is like having that loss happen all over again. I don’t mind being the sad sap I guess.

I already have forgotten the sound of my grandmother’s voice. When I realized this I tried again, closing my eyes and concentrating on the rasp of her vocal cords, the lilt in her inflections. It wasn’t right. I’ll never get it back, but I do still have the blanket. Safe and tucked away in a hope chest in my son’s room, I dug it out a few weeks ago.

My daughter said she was cold and I wrapped her up in it while we talked. I told her it was her great-great-great grandmother’s blanket.

“Okay, because it’s dusty. If it smelled like her then she should have taken a bath.” A few minutes later. “Can I take it off? It itches.”

My daughter then asked me about my stories and if I would read them. I read her a little section of one of my stories. She asked if other people read them. I said I hoped so.

And then it hit me. I’d been wanting to put my backlog of published stories up for free for some time, but I’d been holding on to them, waiting for a “good time to share them.” Also I’ve been hoping to sell them as re-prints, but really that market is pretty competitive and what I want most is for them to be enjoyed. I wrote them so they’d get read. I didn’t ever mean for them to sit on my computer after the rights reverted back to me. I didn’t ever mean for them to be folded up like that blanket in the hope chest. Things should always be in use. Even stories.

One day I hope to package several stories up into a self-published package and offer them for cheap. For now I’m going to put them on Wattpad one by one. Starting with a recent story that was originally published in Galaxy’s Edge May 2014 issue. “Pocket Full of Mumbles” is about a woman who captures unheard phrases and last words and weaves them into blankets. I thought it was a good one to start with. 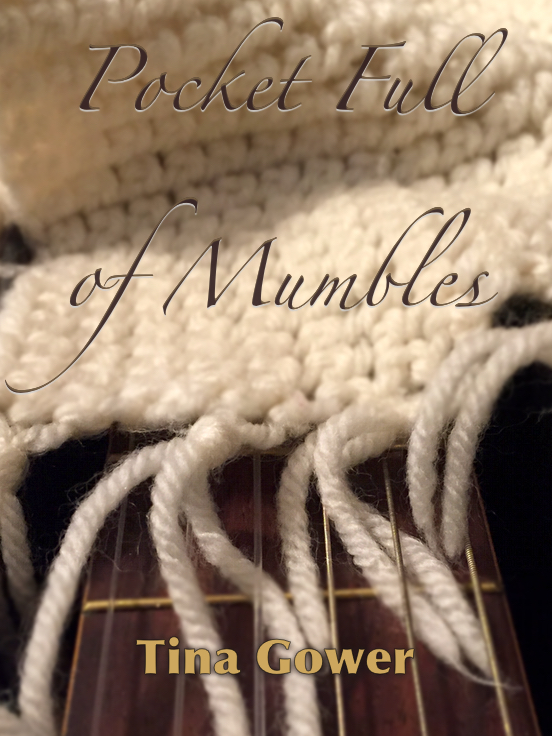 The secret to getting better covers is to do really terrible mock ups and show them proudly to your computer savvy husband, who then takes pity on you and throws together a better cover than you could ever do in Powerpoint. My version had lots of filters, and every font trick (bevel, glow, drop shadow). It was pretty much the jazz hands of all covers.

Link to read Pocket Full of Mumbles on Wattpad

I love comments! Everyone who leaves a comment will help someone reclaim something that has been hidden away.

10 thoughts on “The Really Awful Secret”