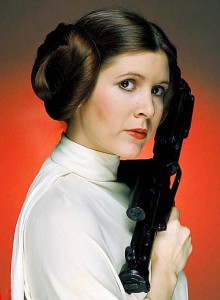 I can blame my first exposure to science fiction and fantasy on my dad. On snowy weekends when I was a kid, my brother and I would dog pile onto the floor (and each other) using my dad as a backrest and watch all sorts of movies and shows. From Westerns to Andy Hardy movies, we loved them all. But one of my favorites, and introduction to science fiction, was Star Trek.

This interest in science fiction was a mild flame and segued into the time of Star Wars. No elementary-aged kid missed the science fiction epic, and my family joined the masses to see it one summer night at a drive-in, and my young life was transformed. The movie had the quick-draw appeal of a Western, the swashbuckling of a pirate movie, and the adventure of any of my Saturday cartoons.

But better, it had a Princess that was a force to be reckoned with. Pistol in hand, she ordered the boys around, led missions, and hardly needed any saving at all. (The crushes on Luke then Han would come later—my first love was Leia) I still have my Leia action figure stowed away in a box under the stairs.

Then there was the Terminator with the unparalleled Sarah Connor morphing from victim to freedom fighter, taking her future in her own hands.  (Plus she could do a hard-core-full-on pull up by T2.) Who wasn’t inspired by her physical and mental toughness?

The list continues with Wonder Woman, the Bionic Woman, Xena, and Buffy. All main characters leading their own shows giving me the idea that a woman could be strong, powerful, and just as interesting as the boys.

Let’s not forget other non-main characters such as Zoe, River, and Kaylee from Firefly and most of the companions on Doctor Who: Rose, Amy, Sarah Jane, Martha, Donna, and Clara.

Another recent source of inspiration has been Game of Thrones. All Martin’s characters are gray and compelling, but his most moving examples of toughness, intelligence, and power are Arya and Daenerys. They lose everything that matters to them, yet they keep going, they keep striving, they keep surviving.

When I feel overwhelmed, lonely, broken, at the bottom of my will, I still think what would Princess Leia or Xena do?  What about Diana Prince or Sarah Connor or Buffy? Buffy literally died twice and kept going.

They wouldn’t give up or in. They would fight. And from all those years of watching these characters fight, I am pushed to dig a little deeper and  try harder. They may not be real, but the feelings they inspire are.

I think one of the reasons I’m drawn to both fantasy and science fiction is that it consistently provides wonderful examples of strong and intelligent women, and I only see that continuing with Katniss from the Hunger Games and Tris from Divergent. I’m proud to be a sci-fi/fantasy nerd and will continue to be inspired by and (create in my own) kick-butt females.

I am excited about the new Star Wars movie and hope the franchise continues to provide the next generation (and me!) some fascinating, powerful, and take-no-crap heroines.

What about you? Did you have a fave sci-fi/fantasy hero or heroine that gave you inspiration? Or just drop down below and say hello. Thanks for stopping by!