I didn’t figure out I was at SuperStars–not to learn, but to unlearn–until the morning of the second day. Sawing through an English muffin that I expected to have the consistency of a pumice stone, and eyeing the leathery ham under my eggs—I did not expect my eggs Benedict to meet the expectations James A. Owen had stoked. There were also potatoes that looked like usual hotel potatoes. I expected them to be as exciting as stale French fries—because that’s usually how hotel potatoes taste—like potatoes that could have been average, except they’ve sat under a heat lamp all morning and now they’ve become a thing to avoid, or face the wrath of reeking potato breath.

But I wanted to like it. For the first time someone had set me up to want to like something I was pretty sure I wouldn’t. See, James told us the story about the best eggs Benedict he’d ever eaten. How the waiter had sold him the meal by telling him it was the house specialty. How the chef baked a batch of English muffins every fifteen minutes, just so the bread would be fresh. How he raised the chickens and gathered the eggs just that morning. How the chef named the pig. How the chef used a family recipe that had been passed down for generations…yada, yada, yada. Passed down recipes? He had me. I’m in.

I tried the potatoes first. They were not stale, in fact, they were delicious—and I’m picky about potatoes. I ate two more and eyed the eggs Benedict, still unsure.

Eventually I hacked at the muffin again once the sauce had loosened the pumice-like bread. I released my earlier hunch that I’d be let down and lowered the barriers to allow for the possibility of a good experience.

Damn. I liked it. It was the best eggs Benedict I’d ever had. Pay no attention to the fact that this was the first eggs Benedict I’d ever had. Pay attention to the fact I hate ham, but was happily eating it as part of my meal anyway. I’m not crazy about poached eggs, but I’m pretty sure I chased around every last bite and swabbed my potatoes around the plate to be sure I got all the yoke. Yeah, it wasn’t the same eggs James had talked about in his story, but my brain didn’t care. 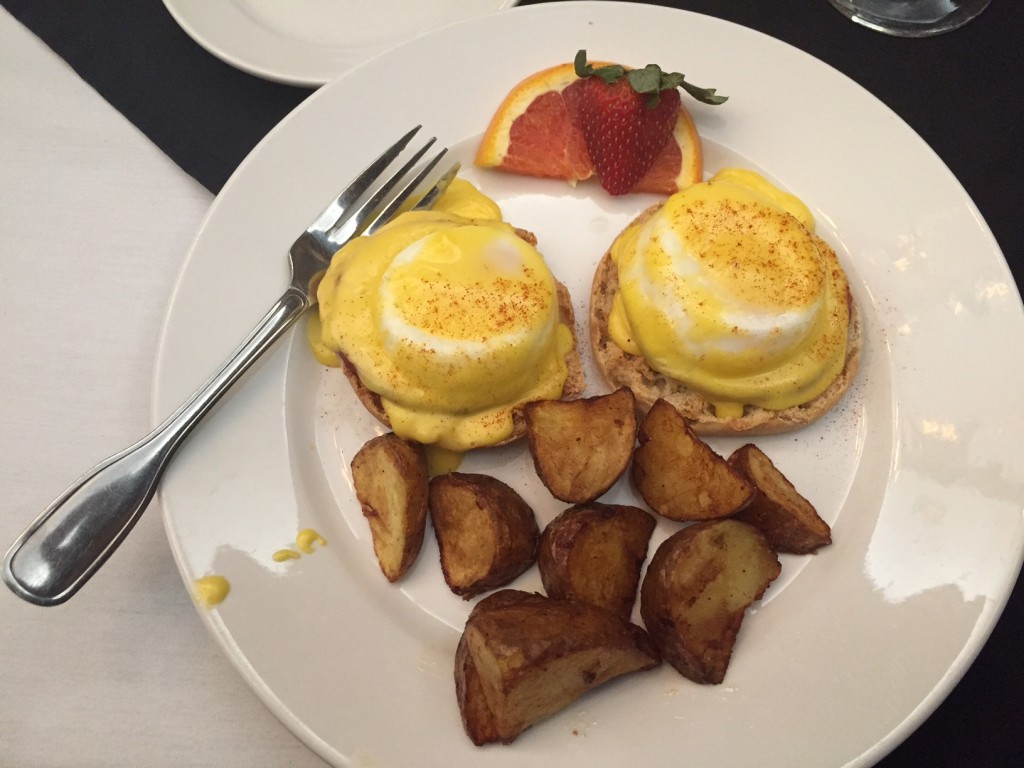 Thankfully I snapped a picture of my life-changing eggs Benedict. Actually, honestly, my first thought was boobs. After spending the week before with Meghan, that’s all I could think about. Or, seriously, it does kinda look like a plate of boobs. Delicious, tasty boobs.

James pointed out that he didn’t tell me he hoped we’d like it, or that he’d tried to instruct the staff to recreate it, but was limited to the resources at hand. Or that it wasn’t his best and he wished he had something better for us—any writers find these excuses familiar?

He’d set my expectations high even though it was possible I’d have reservations. He didn’t ask me if I had a ham aversion. He did pull my plate away because it didn’t have paprika like he’d promised it would. The hotel staff remade the eggs for us because they wanted them to be perfect after they’d heard the talk (we found out later we were the only group who had their entire meal re-made—so this was not a gimmick).

This was a lesson in positive psychology that I’d forgotten I knew. Instead I’d allowed myself to fall into the trap to expect less and be pleasantly surprised when I was given something more. I’d even done it with the breakfast. When I found out what eggs Benedict actually were, I thought, “crap, I’m going to hate it.” Then I was subjected to a talk about how I was going to love them. He set me up by making me want to love it, just by telling me the lengths the chef in his story had gone to make it great for me. And it changed the way I viewed it. Instead of focusing on the negative of the meal, eventually with each bite I only saw the positive.

As writers we’re taught to never say we love our work out loud. That we’re to remain humble and let others do the praising. Otherwise it looks like we’re boasting or too confident. Plus, if we set up expectations that a story is going to be awesome and it doesn’t meet that expectation we’ll be left looking foolish. Also not to confuse boasting with comparing or telling someone “my work is better than ____’s work” that’s called being a jerk and not the same thing. I think writers confuse the advice and somewhere along the way it became more common to downplay, even tear apart other’s or our own talent publicly.

I’m naturally a positive person. I don’t like to focus on the negative for too long or I think I’ll shrivel up and spiral into depression. Writing is a difficult profession to avoid negativity. Daily rejections? Critiques? Reviews? Other jealous writers? The field is seeded with land mines of negativity. I’m full of positivity and when I realized the status quo is humility, I quickly shut up about my accomplishments and funneled all that energy into my friends’ work. When I come across writers I love who write stories I love, I become the biggest cheerleader for them. But never for myself. And when I hear them retelling the awesome way I got here, I do my part to downplay, to be humble, to shift focus. Because I don’t want to be a jerk, or set expectations too high.

While I ate my eggs Benedict and made “do not cry” “do not cry” my mantra for the rest of the weekend, I realized I was not there to learn or to continually mess up my mascara with the influx of overwhelming emotion. I’d heard every one of those lectures before. I’d probably heard most of them twice. I was at SuperStars to unlearn in the best way possible. I already feel like the stronger writer I was meant to be all along.

I’m a huge fan of unlearning. After I was diagnosed with dyslexia, I had to unlearn what I’d been taught and re-learn in a way that fit how my brain would process information more accurately. After I suffered extensive nerve damage and was paralyzed, I had to unlearn the way my muscles were taught to move and re-learn how to walk. And when my son was diagnosed with a medical condition, I had to unlearn that I’d done something to cause it, or that I could find some “natural” way to make him better, but accept and relearn to trust the medical professionals to fix the problem and prevent excessive hospital visits.

Every time I was not told I could do it, or that it was even possible. I had to grasp at my own belief that it could be done. If you think something isn’t possible then it isn’t. If you believe you’ve reached the top then you’ll never go any further. There is always, always an opportunity for improvement, even a very small one. Maybe not in the way you think, but some other way. Raise the bar.

This was exactly the best message to receive right now. For me, it was perfect. Actually, I guess I can tell the real story now. I didn’t ever sign up for the eggs Benedict. Around December I got a message from Nancy Greene (one of the SuperStars coordinators) telling me I’d gotten in. It was already booked up and people were waiting at the gate for an open seat. I checked with her several times to be sure there wasn’t a mistake. I didn’t sign up for it. I was sure. Because at the time I signed up I didn’t want to spend too much money, so I didn’t sign up for any of the “extras.” Nope, she said, no mistake. Before I would have given the spot to someone else (actually I was still considering doing that all up until that morning), but lately, since my parents house burned down and last week I’d just come back from a week of taking care of Meghan after her mastectomy—I’d learned to not ignore the universe telling me I needed to pay attention to something.

Should writers bother to go to SuperStars? What if the writer all ready knows it all? What if the workshop is a waste of money? Sure, that’s fair to ask. Since everyone always wants to know what’s at this workshop for them I’ll give a run down of options and reasons writers should go.

If you’re new to the business side of writing, go to SuperStars to learn about the basics: secrets of the writing world (copyediting mistakes to avoid, how to not be a jerk), how to be successful at a Con, what editors are looking for, common traps to avoid.

If you’ve been around for a while and been actively involved by sending stories out consistently, or shopping for an agent then go for the intermediate information: negotiating contracts, IP/trademark/copyright law, how to read a contract, what to ask for in a movie option or how to make money in Hollywood, what to look for in an agent or editor; do you even need one? How about an entire weekend of helping you weigh the options of traditional publishing vs. self or indie publishing? They’ll have that, too.

But if you feel jaded and/or depressed–maybe you’ve done it all and have nowhere to go except to continue to sell and convince people you’re here in the business to stay either until you die or they take out a restraining order on you–then go for the unlearning past negative thinking. Go for the positive energy. Go for the unexplainable feeling that you finally feel like you’ve found home carved from a rock in the middle of a desert, where there is an amazing supply of fresh water and food.

Feed your writing soul. Go to SuperStars. Seriously, just go. If not for the best eggs Benedict you’ll ever have, or the endless inside jokes on purple unicorn, then go because they’ve got people waiting to initiate you into the tribe. If you’ve been looking for a place to feel you belong, then stop. I found it for you.

I love comments! For every comment you leave a writer will think a positive thought, unlearn negative ones, and find their tribe.

As a side note, someone in the SuperStars Writing Seminar Facebook group posted this great video on positive psychology and how people can use it to start being happier and healthier. It reminded me a lot of how I felt after the 100 Days of Good Karma project Meghan and I did (which was really a 100 plus days of posting the positive messages we’d learned each day). I think since then I’ve viewed the world in a more positive light.

21 thoughts on “SuperStars Writing Seminars: A Week of Unlearning”